As the global Fashion Weeks get under way the conversation once again turns to the lack of diversity in the fashion industry. And in this case the presence or should we say the lack thereof of models of colour on international runways. Fashion weeks are probably the biggest platform for models regardless of race, the places where for the lucky few new names and faces are launched and careers made. Designers have their favourites, their muses who depending on their profile can end up walking each show for years to come. And with many hopefuls desperate to make a name for themselves supply outstrips demand with models of colour often being the ones to lose out.

The fashion industry needs to take greater responsibility for diversity on the runway, but despite ever increasing calls for designers and casting agents to do more to make the runway more diverse, there is still a ways to go to overcome the challenges that models of colour face before they even get anywhere near a runway. Starting with agencies, usually the first point of call for a budding model who either walks through the agency’s doors to sign up or is spotted out and about town. Agencies decide whether or not to sign up a model and the more prestigious the agency the harder it is to get on their books.

In a frank interview with Global News Canada Deddeh Howard, an African-born, U.S.-based model talks of being turned away from agencies because they already had a black model on their books and would therefore find it challenging to get bookings for her. This is the reality of being a model of colour. And in response to the treatment she received Howard, together with photographer Raffael Dickreuter, launched the “Black Mirror” project to highlight the lack of diversity in the modelling world. Together, the duo recreate fashion ads like the one below, replacing the white models with Howard. And Howard is not alone in campaigning for greater diversity in the industry. 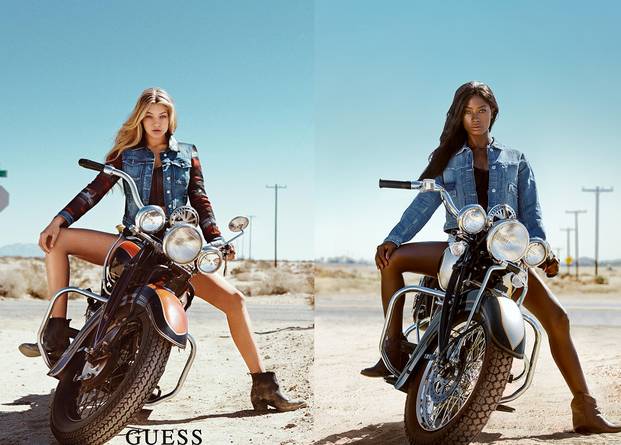 Naomi Campbell, one of the modelling industry’s most successful and high-profile model of colour has been out spoken on the lack of diversity in the industry and has vowed to keep raising her voice until more of those responsible listen. A recent headline in WWD read ‘Naomi Campbell Blasts Fashion Industry for Lack of Diversity (Again)‘ sounding more like enough already but Campbell has remained defiant saying “I will not shut up until it gets to the point where it’s equal, balanced.” ‘

But diversity is not just about having black models on the runway and in mainstream representation, it is also about models of other ethnicities, Asian, Latin American, Native American, youthful and mature, as well as the standards of body type and recognising that real people do not conform to one standard as currently defined by the industry.

And whilst representation is getting better, when it comes to models of colour the reality is that not every runway show will have models of colour, but that is not the issue. The issue is about having more models of colour on the runway than just having the token black girl to check of the list.