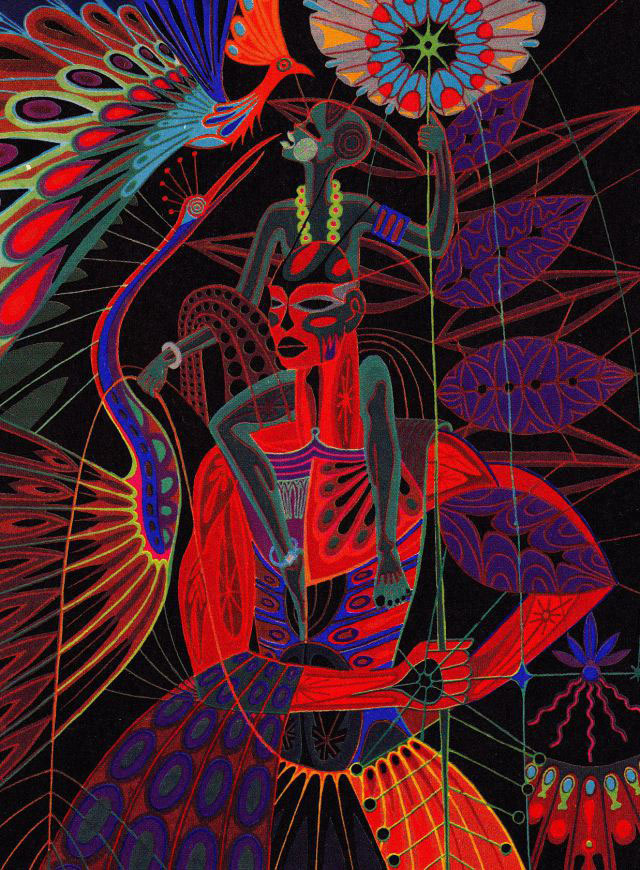 Papa Ibra Tall was a Senegalese artist known for his majestic tapestries, rich in detail, colour, and pattern; and at several metres in length and width covered large expanses of wall space. Tall’s tapestries were woven in wool, which gave them a heavy sumptuousness, a quality heightened by the vivid, intricately themed imagery. An artistic style that calls to mind the highly decorative characteristics of Art Nouveau, of depicting nature, dramatic flourishes and rich colour.

Papa Ibra Tall studied architecture and fine art in Paris. It was here that he started to design and weave his tapestries having been inspired by the designs and colours he had seen in a local exhibition of carpets and rugs. Tall was also instrumental in organising an exhibition for Black artists living in Europe.

Papa Ibra Tall returned to Senegal in 1959 following the country’s independence, and there began experimenting with ceramics, screen-printing, and tapestry. He eventually set up a loom and began working on the development of modernising weaving within his country.

Between 1974-1991 Papa Ibra Tall’s work was part of a major traveling exhibition showcasing contemporary Senegalese art in America, Europe, and Asia. He also received various honours that included Commander of the Academic Palms of the Republic of Senegal; the Knight of the Order of Rio Branco from Brazil; and in the USA he was awarded Freeman of the City of New Orleans and the City Atlanta.

Papa Ibra Tall passed on in 2015 leaving behind a legacy that marks his place as one of the founders of contemporary African design.